Looking at all the great "sketches" I got at Project Comic Con, I was thinking about how it's kind of funny how con sketches have really become commissions at this point with everyone from the big names to the young unknowns doing insanely thorough work at cons. I remember being happy with some quick pencil roughs back in the day and now these guys spend nearly an hour or more on these babies.

Here's a wonderful pen and ink piece from Jason Howard, artist of The Astounding Wolf-Man and Sea Bear & Grizzly Shark. Jason was a great guy. We talked about his workload and technique as well as Robert Kirkman's little AMC TV gig and the finale of A-W with the big number 25 coming up. 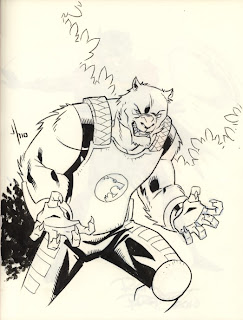 Posted by Timothy Bach at 1:29 PM No comments: Links to this post 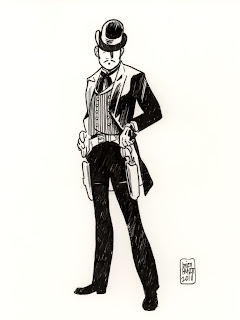 This weekend, I attended both days of Project Comic Con in St. Louis--the second year of this newer but growing show. The Con was great; I met some great local talent and I was able to talk with established industry pros. All-in-all, it was an incredible professional experience that provided me with lots of fuel to keep making comics (and a great excuse to indulge myself with some custom artwork).

It was a small show (by some standards), but I think Project Comic Con was better than other cons I've been too. In fact, the con was really the perfect size. Big enough that some major talent showed up (Fred Van Lente, Ethan Van Sciver, Adam Kubert, Gail Simone, Jamal Igle, Ryan Ottley, and Jason Howard to name a few--plus local luminaries Matt Kindt, Cullen Bunn, and Brian Hurtt); but small enough that you could actually talk to them. (The guys putting on the show did a nice job. If you want to check out the show's site, click here.) 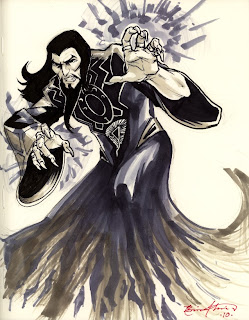 But the reason I went to the con was to meet others like me: people who are making comics. I met several up-and-commers who are making comics. It was great to hear their stories (both fictional and personal), and to see what they had done. I'm particularly jazzed about the guys at Ink & Drink Comics and their anthology, Spirits of St. Louis (which I bought and you should, too, when it's officially released next month). They seemed like a great bunch of talented guys, and I hope to work with them soon.

Probably the most fantastic part of the weekend was that in talking with artists and writers at different stages of their comics-making journey (noob to pro), I found that as an aspiring creator, I had a lot in common with all of them. I'm not saying I'm as good, mind you, but we were speaking the same language and shared a lot of the same desires and struggles.

Talking with comics creators is different than just talking comics at your local store or even on a message board, and the energy and excitement in the air really charged me up. That's what great about attending a con: the people there are passionate about making comics and the energy is infectious. (But that may be because of all the handshaking, I don't know.) If you are thinking about making comics, get to a regional show. Even if it's not the biggest or the best, you're likely to meet like-minded creators. And hopefully, you can learn something, get charged creatively, and maybe even find some people to collaborate with.

I've been so focused on making comics that I had been denying myself original art commissions over the last few months. At Project Comic Con, I bought several con sketches, which I'll be posting over the next few days. The one up top is Drake Sinclair from the totally awesome Western-horror comic The Sixth Gun (drawn by series artist Brian Hurtt). To the left you'll see the Mandarin, a wicked little drawing by Brian Atkins, a very talented artist.

Update: My group's anthology is almost done. We are just waiting on the cover. Soon, very soon, I will be showcasing final art from my story. The above header is a preview.
Posted by Timothy Bach at 1:55 PM No comments: Links to this post

Timothy Bach
United States
Join me here and at MoonriseComics.com or on Twitter @TDRBach to follow my adventures in making comics.

Read "The Customer Is Always Right" now for free!